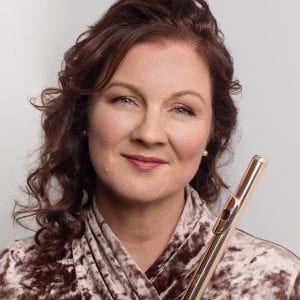 From 2000-01, Gilbert served as visiting artist in residence at the Juilliard School (Jeanne Baxtresser International Flute Masterclass), and has given masterclasses in orchestral flute playing across the U.S. Her interest in the similarities between orchestral playing and chamber music playing was the subject of a program entitled “The Chamber Music of Orchestral Teamwork” that she presented with the RPO flute section for the National Flute Association.

She has served as lecturer in flute performance at Ithaca College, and adjunct faculty flutist at the College of Mount St. Joseph (Ohio), as well as the College of Charleston. She has served as vice president and program coordinator of the Rochester Flute Association and maintains an active teaching schedule with her private flute studio and as coach/mentor with the Rochester Philharmonic Youth Orchestra.

A Wisconsin native, Gilbert began playing the flute at age nine. She earned a master’s degree from the Cincinnati College-Conservatory of Music and attended the Centre International De Formation Musicale in Nice, France. Her principal flute teachers include Jeanne Baxtresser, Randolph Bowman, Kyril Magg, and Gwen Powell.  She lives in the Highland Park neighborhood with her husband Gavin Rigg, their two boys Julian and Malcolm, and their Rhodesian Ridgeback Nala.