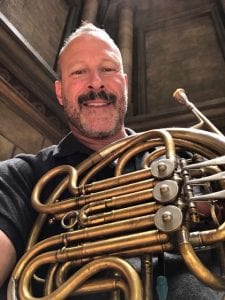 Horn player Stephen Laifer was born in Honolulu, Hawaii into a military family, eventually settling in Syracuse, New York. Laifer began playing the horn relatively late as a sophomore in high school, deciding at the last minute to shelve a career in graphic design and pursue music instead. He studied horn at Ithaca College with John Covert, relocating to the West Coast after graduation to play in the U.S. Air Force Band, where he studied with David Krehbiel, former principal horn of the San Francisco Symphony. In 1990 he was named Co-Principal Horn with the Cape Town Symphony Orchestra in South Africa, a position he held for 12 years. He also spent a year with the orchestra in Barcelona, Spain.

Laifer has worked with orchestras around the globe, touring and performing across Africa, Eastern and Western Europe, Singapore, and China. He was a member of the Syracuse Symphony Orchestra from July 2005 until the orchestra’s closure in 2011. He joined the horn section of the Rochester Philharmonic Orchestra as 4th Horn in September 2012. He is also an active educator, serving as an adjunct on the faculty of the Eastman School of Music as well as maintaining a regular private studio. Past clinician visits have included master classes given at Louisiana State University and the University of North Carolina at Greensboro. Laifer is currently a regular substitute player with the Charlotte Symphony, Indianapolis Symphony, North Carolina Symphony, and the Buffalo Philharmonic Orchestra. He has also performed and toured extensively with the Albany Symphony, Singapore Symphony, and the Tenerife Symphony Orchestra in Spain’s Canary Islands. Outside of music, Laifer is a devoted dog dad, keen hiker, mountain biker, and kayaker, grows more than 200 orchids, and is a busy freelance writer and editor.